Last Sunday 8th March 2020 we received the heartbreaking news that Shakka, Clif as most of us knew him, had passed away on Friday 6th at age 54. Clif had been battling cancer for almost two years on multiple fronts. He fought hard as he continued to live life to the fullest, to devote time to his hobbies and passions, and even to meet some of our clan members in person last November.

Clif was an invaluable member of the clan, of the Populous community, and of his own community in real life. There aren’t enough words to explain how meaningful a person he was. The memories alone that we created in the last 13 years are immeasurable.

Clif joined Populous in 2006, the same year he would join Asgard. This particular quote from his Asgard application very much sums up his character, and very much states the kind of perseverant fighter he has always been:

Why do you want to join Asgard? well I only would like to join if members will actually play... I dont have time for sitting in the lobby talking smack. [...] I know you guys play hard and I do too. I never give up and I always fight to the bitter end.
-Shakazulu

He gave us roughly 5,250 games, averaging between the old league points and the new league system, and missing out some extra games that might not have been accounted for in the system. He participated in 16 clan tournaments, winning one of them and being a runner up to another.

Clif would play with anyone who was willing to join his games. It didn’t matter where you were from, it didn’t matter if your skill level was god level or mush - he would play you, and ally you, or put up a good fight. There was no definition of a bad game for Clif.

And that is how most of the newer members have met him, and how Clif would go on to represent the clan and the community by forming new members in a context of fair play and open mindedness.

He became part of Asgard’s Council in September 2007 as a reward for being a loyal, consistently active member. By 2008 he was promoted to a High Council member.

He was a born leader. His natural conciliatory skills and problem solving mindset helped the clan keep together and sail through the natural bumps and bruises of a competitive gaming community as a family.

Oh my, what happened ? Funny how when I first encountered you guys you were rotten little brats. Now you are dirty young men. :)
-Shakazulu

Clif was appointed as a Pop:Re moderator in 2009, again stressing his leadership skills. Clif would be the kind of moderator to mediate in every conflict, no matter the background, language, or level of naughtiness of the ones involved. He would very seldom use his ban hammer, if at all, but be eager to be involved in discussing solutions.

This is very sad news to hear. He was a big part of the community in a positive way. I’m sorry I was never able to visit him (being the other direction across the country), though he always had an open invitation.

It is worth mentioning that Clif has done this all while at the same time being in real life a renowned Chef and head of the Gainesville restaurant Paramount Grill. A talent that has been made known to the lucky members who have travelled to meet him, and enjoyed the delicious meals he would make for them.

Clifton Nelson, chef and owner of Paramount Grill [...] Nelson just wants to provide well-prepared food that’s creative and made with the best ingredients, including local food whenever possible.
-Anthony Clark for www.gainesville.com

He knew more than just how to cook, Ford said. He treated his staff like a family. He had worked his way up to this position and really taught me about how to run a business.

Clif was also an old school DJ, always eager to delight visitors with his music and invitations to dance parties he would frequent.

Outside of cooking, Nelson’s other passion was music, especially 1970s club disco and 1980s New Wave. He started DJing at My Friends Place, better known as MFP, in the 1980s. Eventually, the DJ lifestyle took Nelson out west to Los Angeles, where Mack said he spun records for fun but waited tables and cooked to make money.
-Emily Mavrakis for www.gainesville.com

After reading about his character and the recognitions Clif has earned in real life, it is not hard to understand the involvement and immense value of his contributions in the Populous community.

Clif has been a part of the life of many of the members of the Asgard clan and of the Populous community in general, with many good - long lasting - real life milestones happening to members of the community thanks to his contribution, involvement and openness to lend an ear and wise advice to anyone willing to listen.

In November 2019, knowing about the advancement of his disease, three of our members travelled from the UK, Canada and New York to meet Clif in Florida. A trip that created memories we will cherish for the rest of our lives.

It is hard to say goodbye to such an important, loyal and overall amazing person. He will be remembered in the way he would want us to remember him - always ready, always willing, always joyous, and with the perfect mic-drop joke up his sleeve to close his act.

This is Rob, I finally am in a state to read all the beautiful messages left for Clif. I just wanted to say what an amazing group of friends and human beings you are and how much joy your visit brought to Clif. The story of how a group of people’s passion for a game brought them together as a family is incredible. No matter how old or young or where they were in the world, they grew together and kept in touch for many, many years. Long live Shakazulu, continue to rain hellfire!
-Rob Mack, Clif’s husband 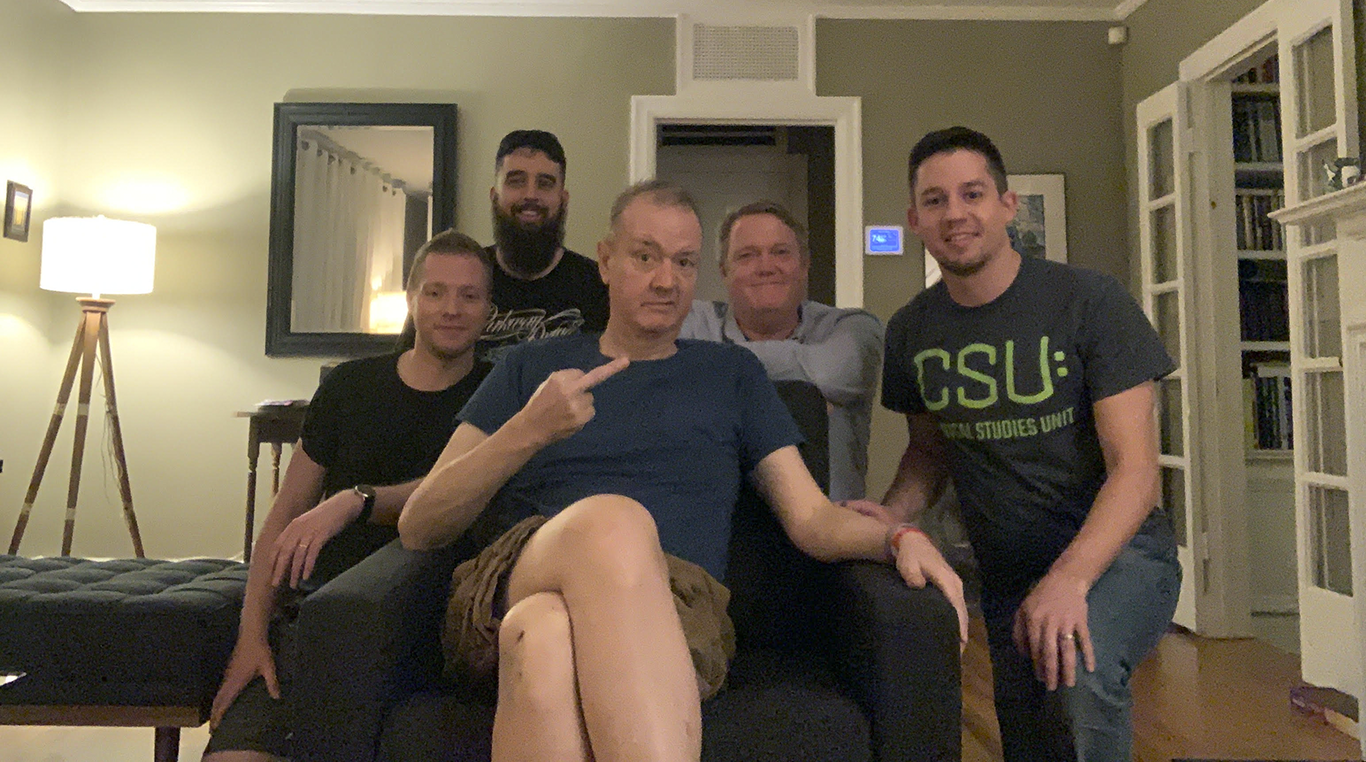 Statements by our members:

Clif was always somebody who I found very approachable and easy to talk to. He was the guy who was always there with a logical solution and helped a lot of us through some very difficult times. I didn’t truly realize how down to earth and easy to talk to he was until I met him in person. I had landed in Florida about 90 mins before the other guys who were traveling to see him. Clif was there with a smile and bag of snacks to meet me. We sat and talked comfortably, we got talking about everything from when he was young, his restaurant and of course the game that brought us all so close. He welcomed us into his home and restaurant like an old friend we’d not seen in years. The trip was packed with jokes, smiles, stories, places to see and memories. Memories that I will cherish for the rest of my life. One thing I always remembered him saying from years ago (2012) and which I discussed with him when we made the trip to meet him is the following:

"As you get older you have different experiences. Which allows you to look at relationships on more complex levels. It’s not black and white anymore. Now you can relate, not get emotional or realize something isn’t as personal as you would have perceived earlier. You realize people are flawed, but that doesn’t mean they are bad. You learn this because you realize you are flawed too. Empathy is the key."
-Shakka

I guess now you can finally get to visit Europe...

Recalling our first night with Clif when he picked us up at the airport. He was wearing this long brown coat, with dark pants and big black shoes and literally was exactly how I pictured him and it was absolutely amazing to see someone look exactly how you’d imagine. And from the minute we started talking, I think it was more apparent that he was everything that one helps when you meet someone online in real life: He was the same. Kind, warm, and hospitable.

He led us all around Gainesville and was so proud of his town. You could see it. The first night we were there, Clif stayed up with us until about three in the morning. This is someone going through cancer treatments and just overall Hell, and he STILL stayed up with us. He got us wine, cheese, and we stayed up and talked about the community we used to play the game with, problems, memories both good and bad, and we even watched him react live to a shaman doll Noelia (Apnea, Craig’s wife) made for him.

Overall, spending each and every day with Cliff was a treasure and I wouldn’t take it back for the world. We got to experience the heart of his life and soul with in Gainesville and spending time with his husband Rob. He took us to a beachside and we all stayed there while he cooked dinner. We walked the beach the next day, went swimming, and just spent time together. We went out to see a musical, he stayed out at bars with us, he took us to a couple of freshwater springs, and filled our belly with good food consistently each and every day.

People like Clif remind me that there’s good in the world and we have to remember that. Clif was a genuine person, struggling with so much, but opened his heart and soul to us all week, never once showing a decline in strength.

I knew Clif for almost fourteen years, meeting through Populous when I was only 17. He was 40 at that time - a right oldie compared to the rest of us - yet we got along like a house on fire. He had such a passion for playing the game and was keen to play with anyone and everyone, resulting in forming bonds and friendships with many players in the Populous community.

Clif could certainly be very frivolous with those he considered friends but he was also very caring, often lending an ear and offering his sound opinion when required. He provided a great insight on life and has helped guide myself and others through the good and the bad that life throws your way.

I cannot believe that I had never seen him nor heard him speak until we met in November 2019. I organised a trip to visit him as he had a tough few years and I knew that I had to meet him should the worst come to pass. What a guy. You would not have thought that he was unwell nor would you have thought that we had never met.

I will forever cherish the memories made in Florida with Clif, his life lessons will continue to shape lives, and with almost six thousand of his thoughts immortalised on our clan forums - he shall not be forgotten.

There have been 37 successful Åsgard tournaments since 04/09/05

We have gathered the most important events that we've lived throughout the years, and we classified them into a visually attractive Timeline.

Visit our memberlist and don't forget to check out our Leagues page too! Pop:Re has kindly provided real-time information for us to show on our site.

We welcome members old and new to apply to join our clan. In this page, you will find a brief explanation of our recruiting process, along with a link to our clan rules.